Occasionally we feature stories sent into us by people who have rescued Dobey’s from us. So, many thanks to Rob for sending in this lovely story of Zak’s new life…

After losing our much loved Jake in April 2008 to cancer at just 5 1/2 yrs young, we managed to last about 2 weeks before I started to trawl the internet looking at rescue places up and down the country.

We found Zak (his original name was Max but we didn’t think it suited him) as a 14 month old young Dobermann along with a few others at the Rescue Centre run by Val Griffiths in Shropshire. I eagerly made arrangements to go and see a few dogs, but Zak was the main interest.

We arrived and was allowed (because we had previously owned Dobermanns) to take one or two of the dogs to the field for a run. 2 of them when they were let off just ran and ran. When it came to Zaks turn, he did run once off the lead, but only ever within 30 feet or so of us. As we walked up and down the field he remained relatively close. An attachment and bond already?? Surely not.

As we got back to the kennels, we asked if we could see if he was able to jump into our then Land Rover as it was quite high. Well, he did this without bother and sat on the back, big happy grin on his face as if to say ‘come on then, what are we waiting for,lets go home!!’

After all the verification checks had been done, we were allowed to take him the same day. we had letters from our Vet to say we were more than capable of looking after Dogs and most certainly able to cope with managing a rescue dog. On the way home from Telford to Manchester, Zak (as we had already renamed him right from the start) lay down in the back and fell asleep, obviously content in the car. We made a few stops on the way back to see if he needed a drink, but he wouldn’t drink.

We arrived at his new home and he was so excited, into everything and lively, it was a great feeling to once again have one of these magnificent animals in our home.

He was thin when he came to us, down to stress of being in the kennels, although it was only 4 weeks for him. He quickly put on weight with his good eating and exercise.

Typical young male, he was strong willed and good fun. We used to take him for walks and runs on the fields where our old friend Jake used to go. A little painful at first but good to see Zak enjoying what was once Jake’s domain.

We were in the process of buying property in France with about 3/4 acre of field. More than enough for him to enjoy. So we went through the procedures of getting his passport for his travels. It was a 1400 mile round trip journey, taking 15+hrs of steady driving. Zak took to the travelling well and just mainly fell asleep.

Zak’s field (as it is now known) was enjoyed by him immensely and he thoroughly settled down at the new French home. We were still living in the UK too but managed to get over to France when we could in 2009 and 2010. I finally moved over to France to complete work on the house while my wife remained in the UK running the business. 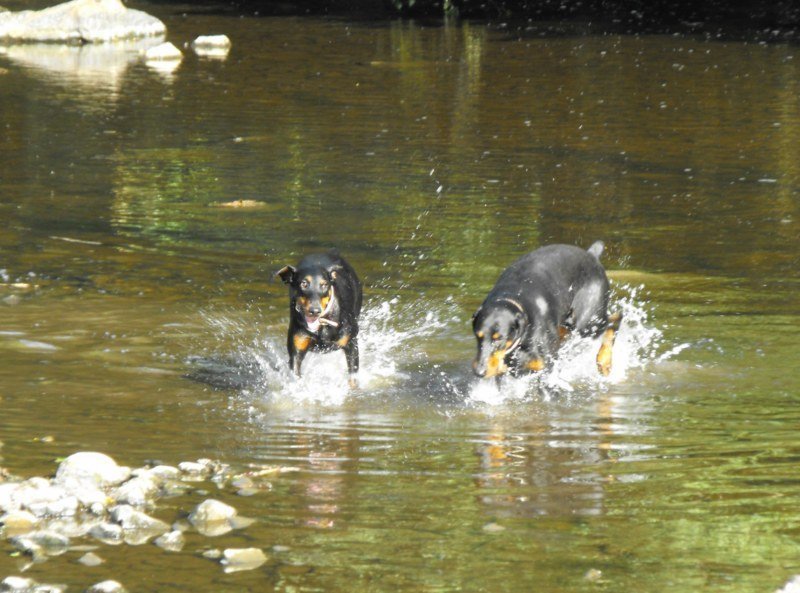 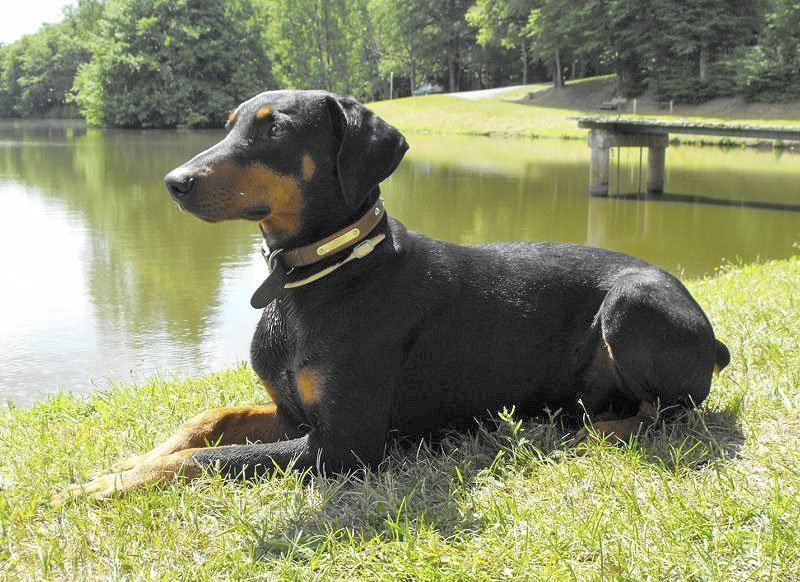 A new friend for Zak

Early 2010 we decided to find Zak a permanent friend to enjoy his field and again looked for a girl Dobie from a rescue home. After some searching we found a 4 yr old who was still with her family but due to the addition of a baby with allergies to the dog, she had to go. The family were not happy having to see their pet go to a new home but decided (sensibly) to place her in the hands of a rescue society as they were sure to find her a good home. She had been on the website for about 1 week.

Not everyone looks for older animals, but we felt it important to try and get Zak someone with similar age, and as Zak was coming up to 3 1/2 so she was seeming perfect.

We contacted the society and made all the usual enquiries. There was obviously a difficulty with me and Zak being in France and Lola in the UK. We chatted several times to the society and I emailed pictures and short videos of Zak over in France, just to reassure them that we have the space for the two dogs. After seeing where Zak now was, arrangements were made to ‘vet’ my wife in the UK and talk face to face. The meeting went as expected and we were given permission to go and see Lola in her home. My wife and son eagerly went over at the weekend and fell instantly in love with her. Although she was a little unsure of the visitors, she soon came round and was seeming happy.

As my wife and son had fallen for Lola, we made final preparations to accept her, making a detailed plan of how she would move into our family. we decided she should originally move in with my wife in the UK for a few weeks, let her settle in and then move her off to France. All arrangements were made and the passport procedure was started.

In early Aug 2010 my wife had Lola delivered by her original family, they understandably also wanted to say their last goodbyes to her before handing us her lead. A mixture of sadness and happiness filled the air.

Lola stayed with my wife for 3 weeks while I made arrangements to drive back to the UK for a weekend and pick them both up. She settled in well in the new home in the UK and was a brilliant traveller, making the 700 mile journey on the back seat of the car.

A match made in… France!

Zak and Lola’s first meeting was on the field and although Zak was very settled, Lola was a little unsure of her new place and was also unsure of Zak. A few runs round and some minor battling for leadership and the stage was set, 2 dogs and a life in France.

It is nice to see now, 12 months on, how they work together and play together too now, best of friends.

My wife is now also permanently over in France and our family once again complete with our two new friends, Zak and Lola.

Rescue Societies play a very important role in managing any transition for any dogs from one home to another and I would recommend thinking about an older dog too, something we have never looked back from.