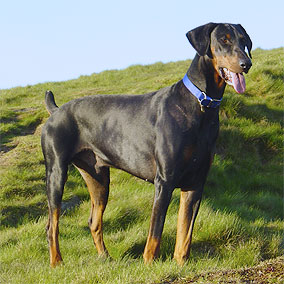 The Dobermann is classed as a medium sized breed. Males are around 27 inches at the withers (between shoulder blades) whereas bitches are usually a couple of inches shorter. The Dobermann is a powerful, muscular dog with a short, smooth coat. Intelligent, loyal and obedient they will stick by your side through thick and thin.

The UK breed standard recognises 4 colour varieties – black, brown, blue and fawn, with tan/red markings. Tan markings on Dobermanns are well defined above each eye, on the muzzle, throat and forechest, on all legs and feet and under the tail.

Sadly some Dobeys wind up in rescue because they don’t meet the strict guidelines set out for the breed – so we won’t focus any further on what constitutes a show dog!

A brief history of the Dobermann’s development

The Dobermann Pinscher is alert, intelligent and loyal, making it a popular companion dog. Originally developed in the German town of Apolda in the last 1800’s by Karl Friedrich Louis Dobermann, the breed was inteded to accompany him on his dangerous tax collecting duties. The height, strength and loyal nature of the dog required wes derived from several other breeds, including the Great Dane, Weimaraner, and Manchester Terrier amongst others, although the exact mixes have been lost to history.

After Dobermann’s death in 1894, the breed was named Dobermann-pinscher in his honor. The pinscher (meaning terrier) attribute was later dropped in Germany was it seemed no longer appropriate. The British did the same a few years later. The breed was further developed by Goeller and Gruening, and gradually became the dog that we are familiar with today.